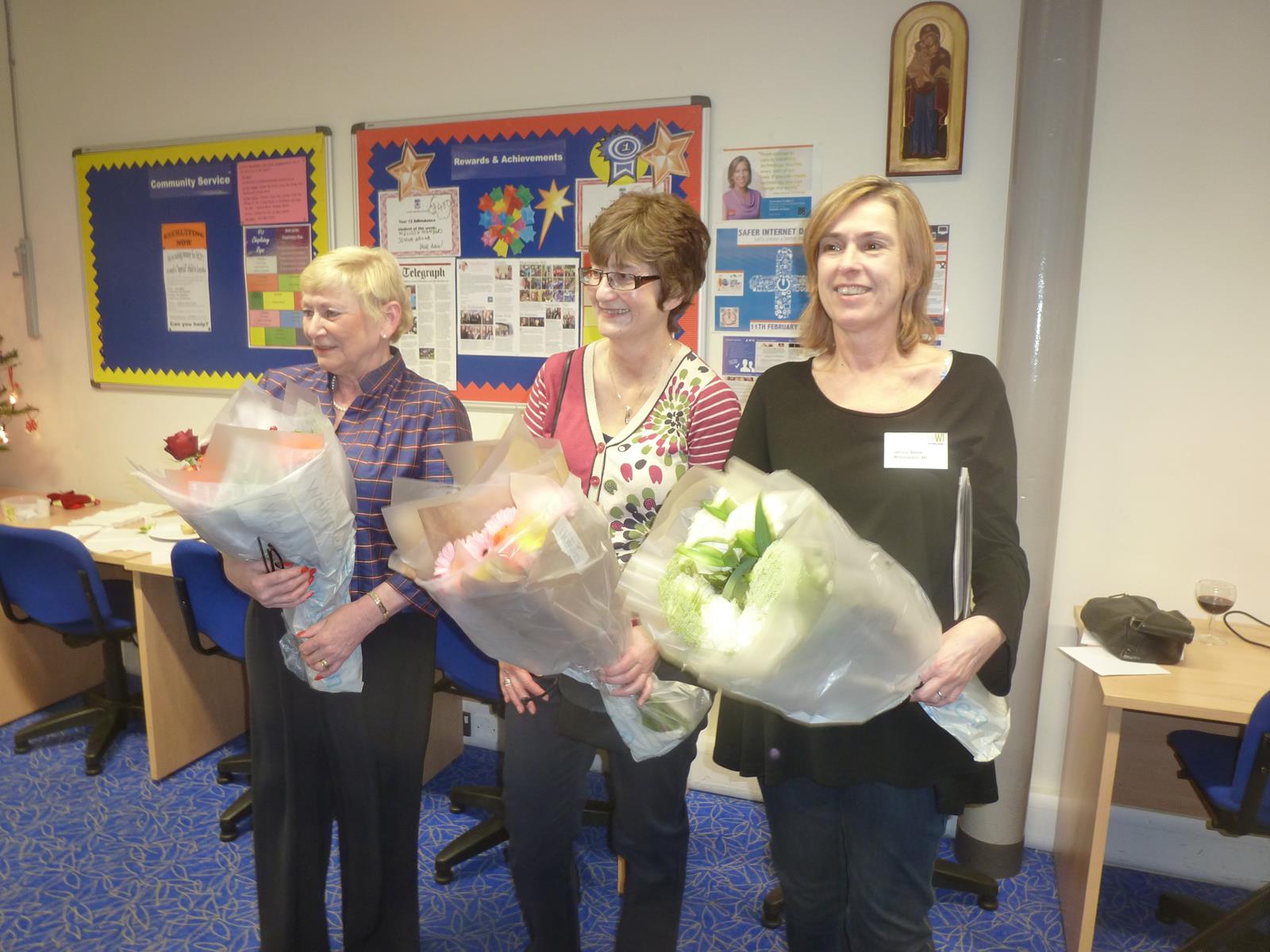 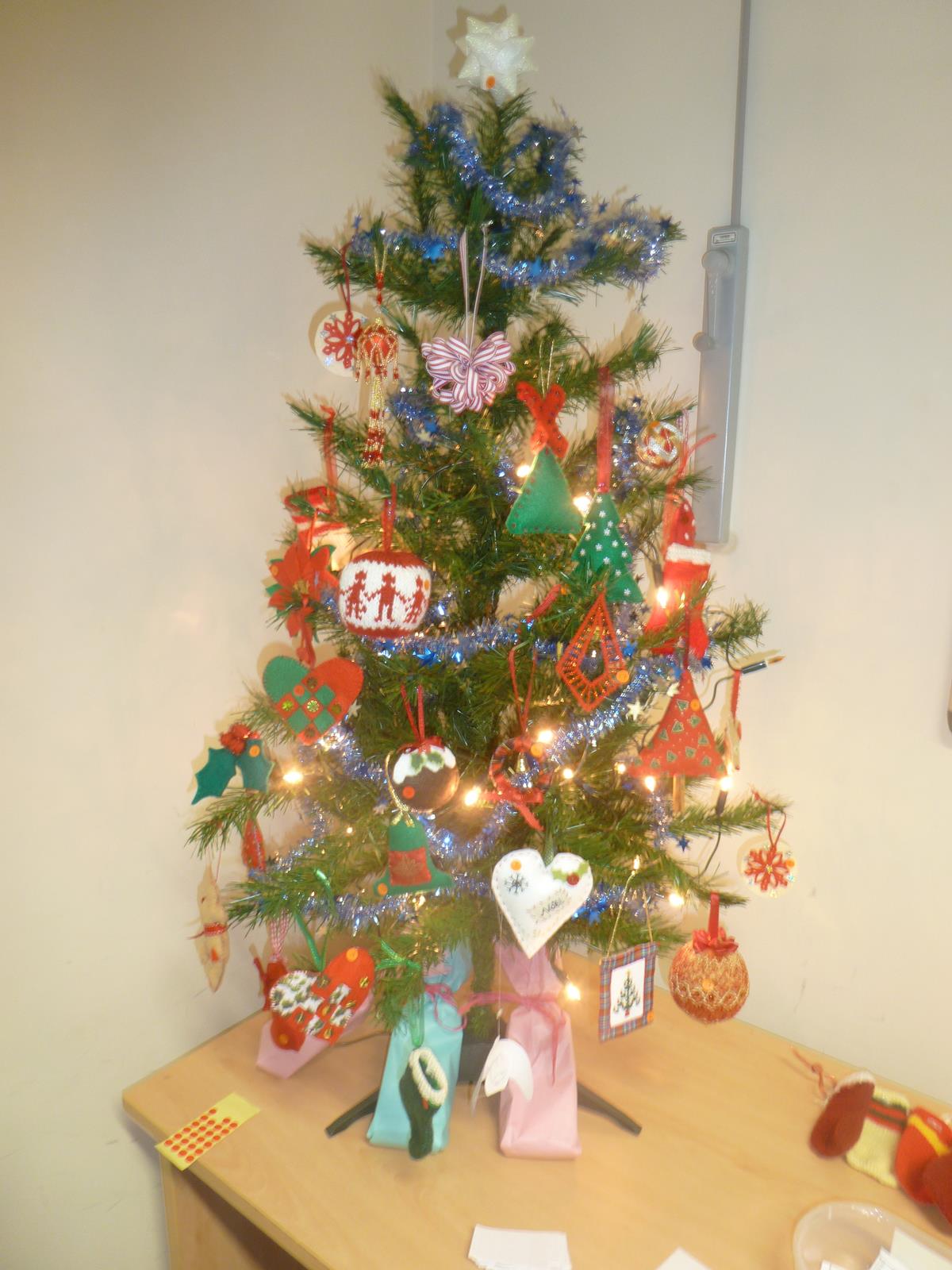 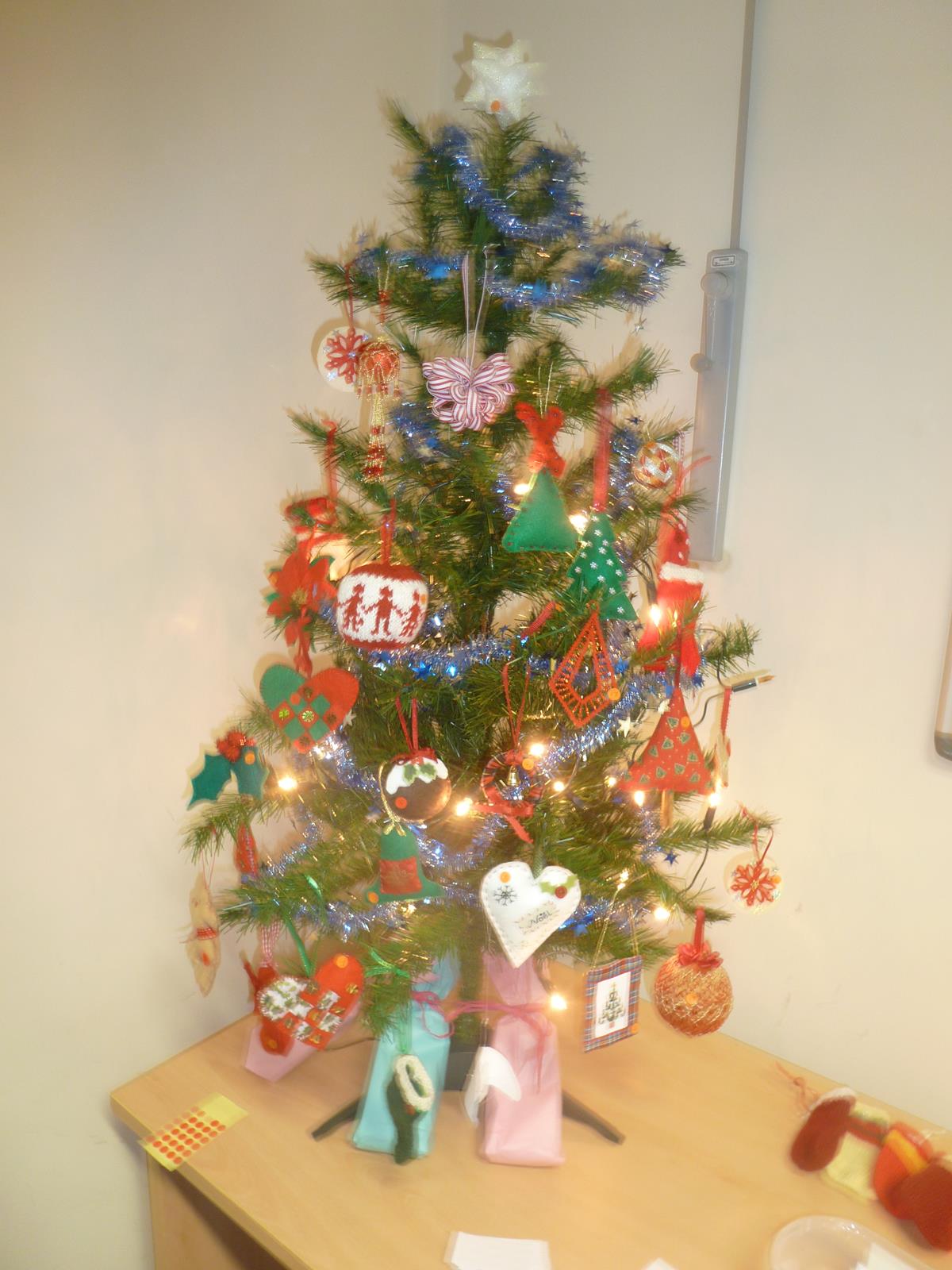 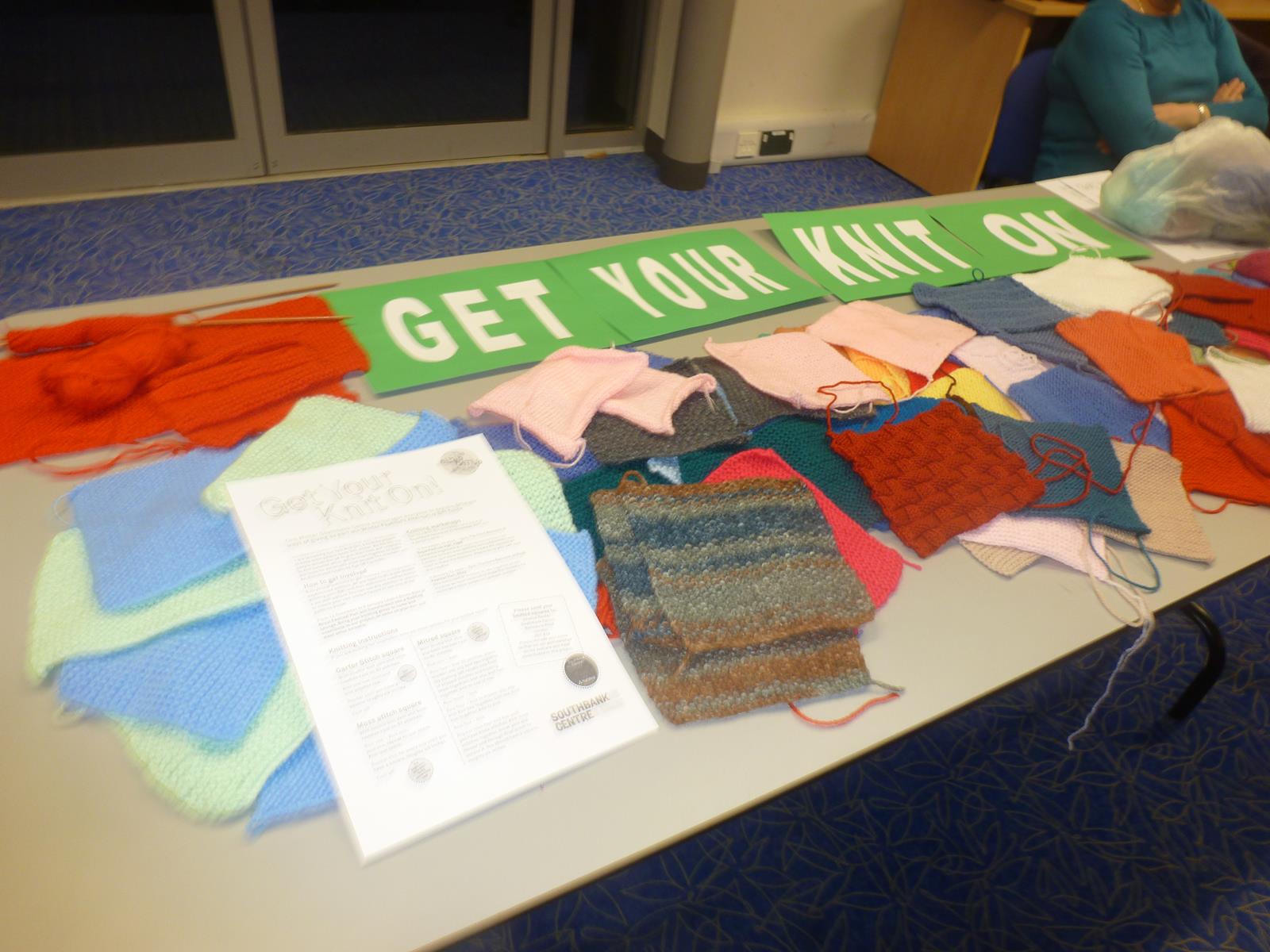 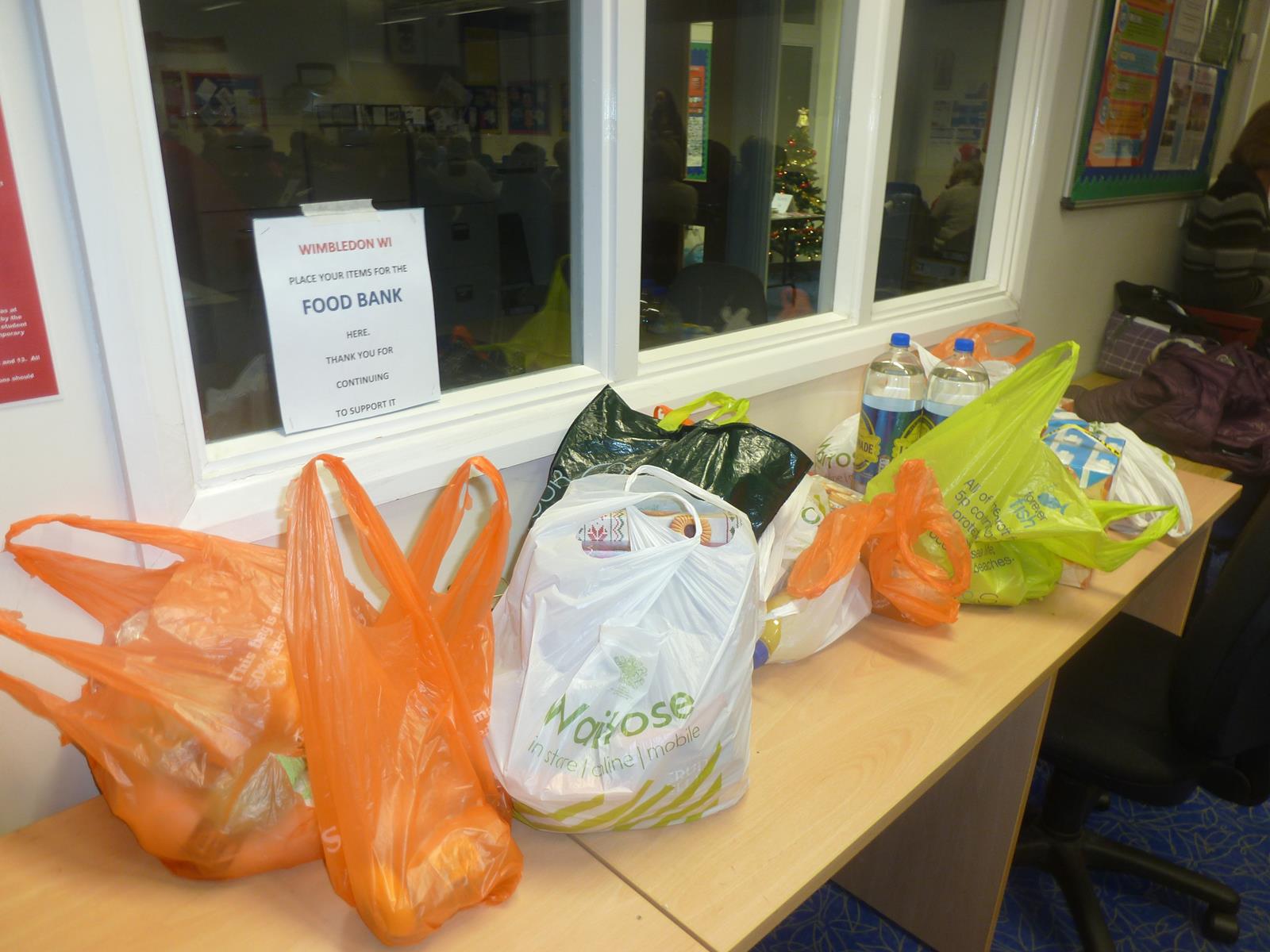 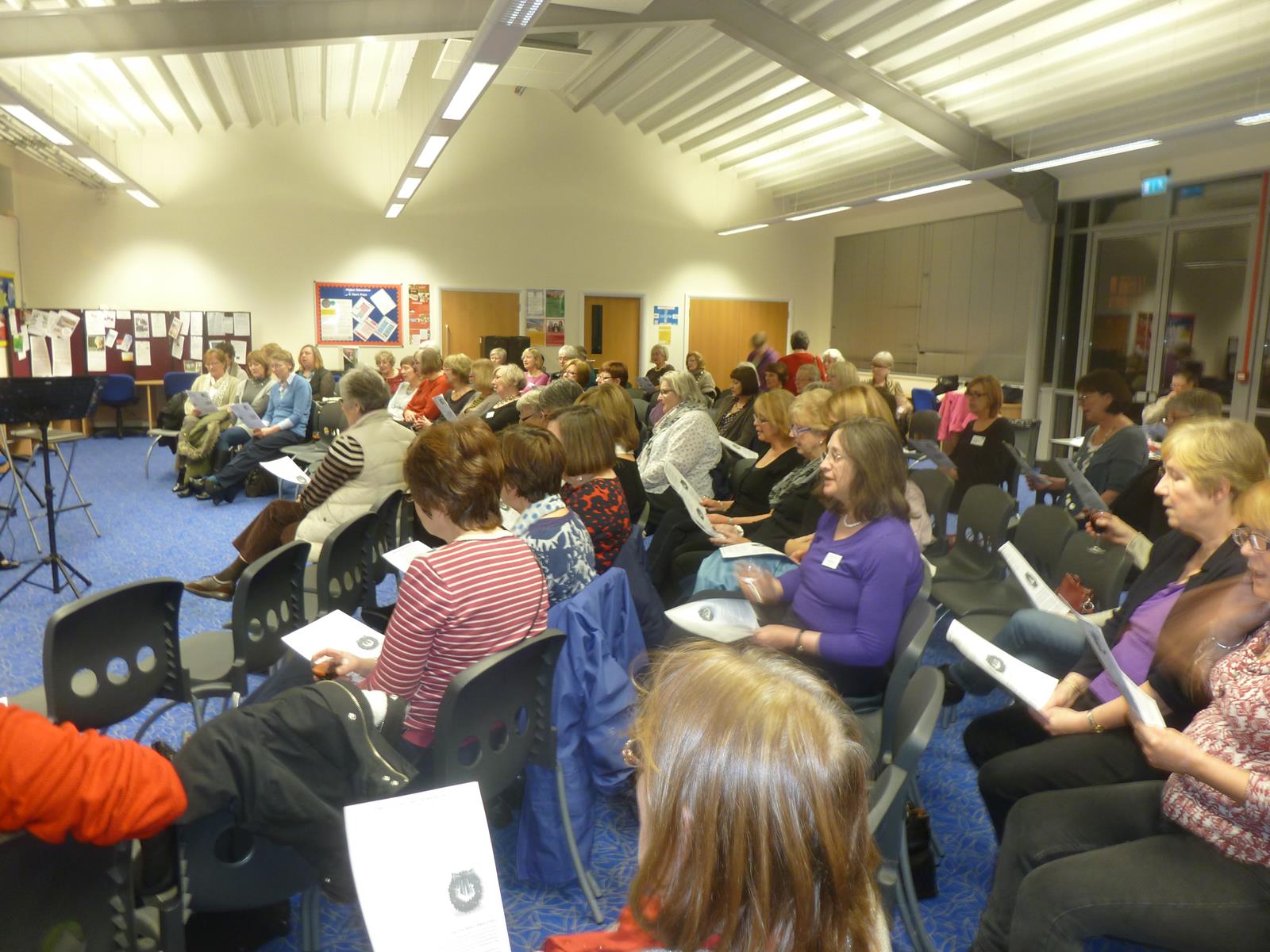 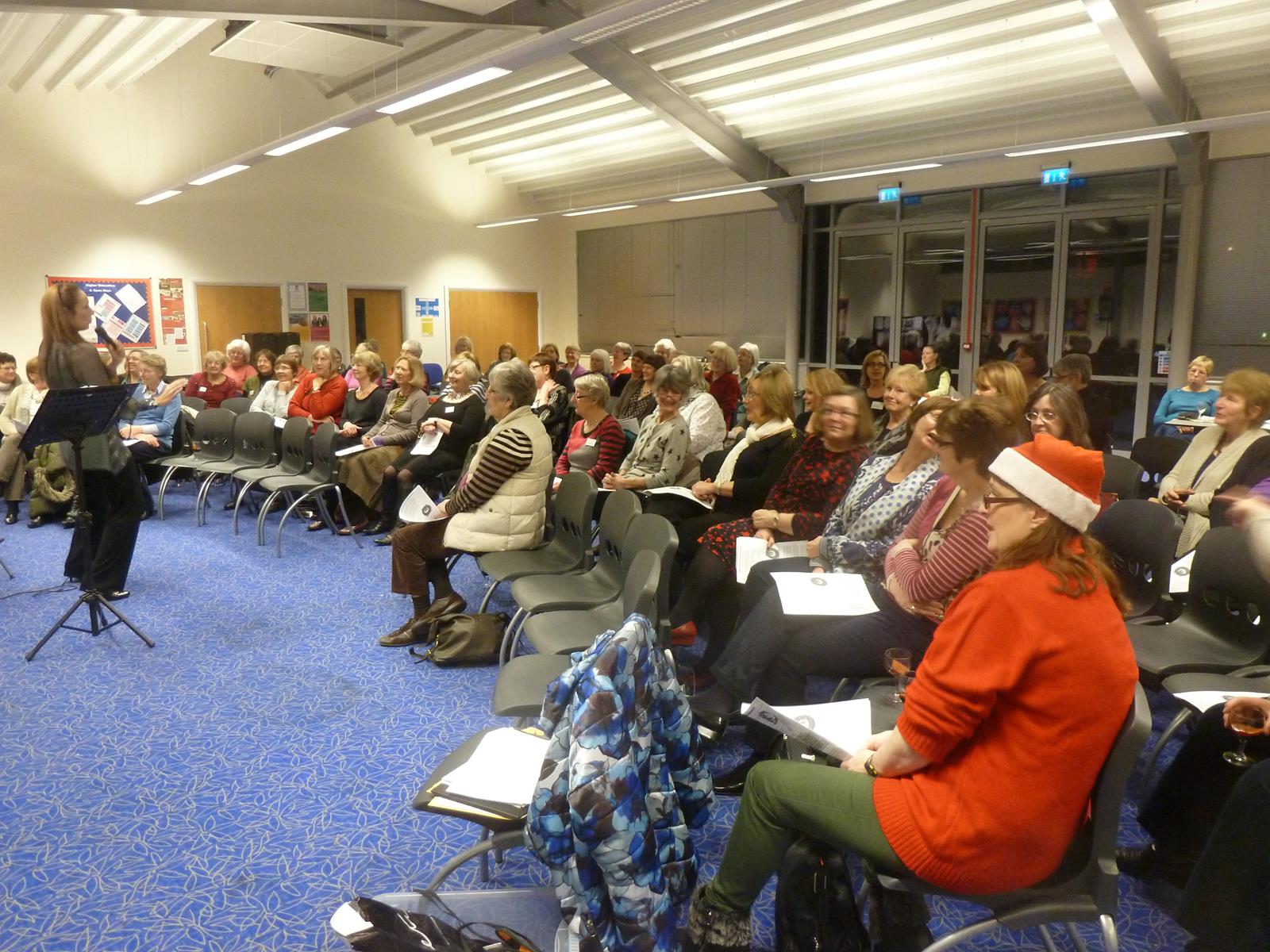 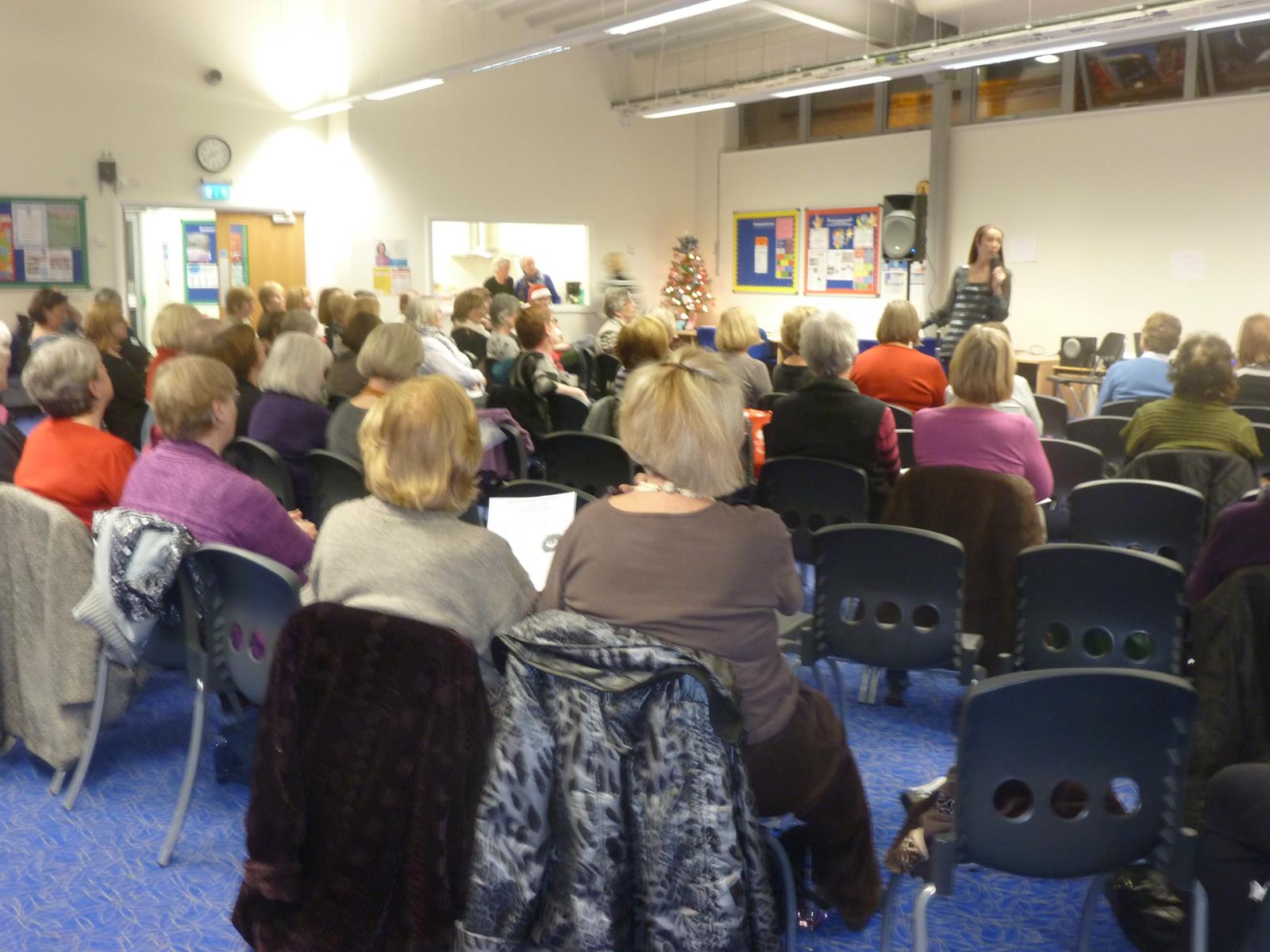 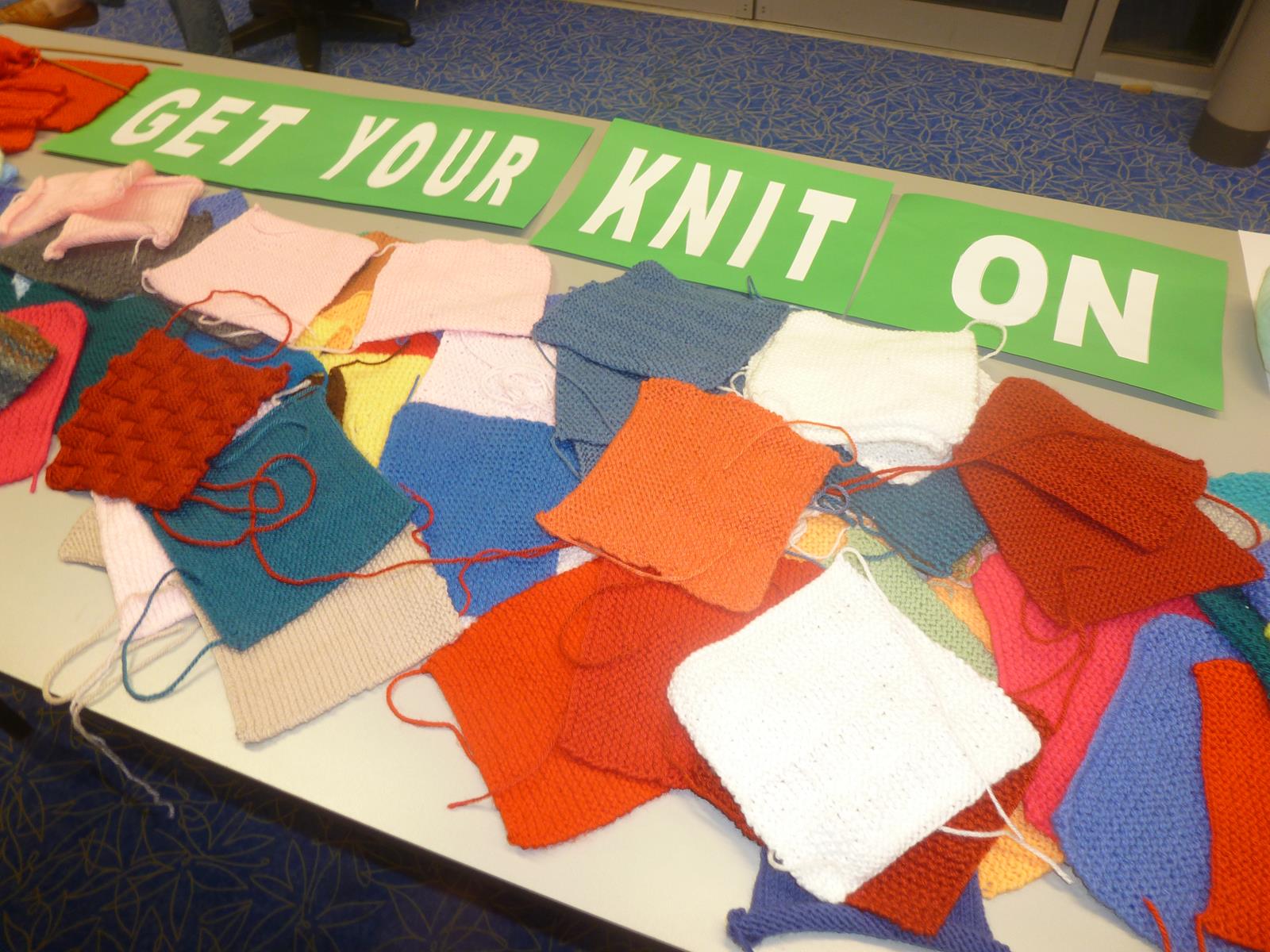 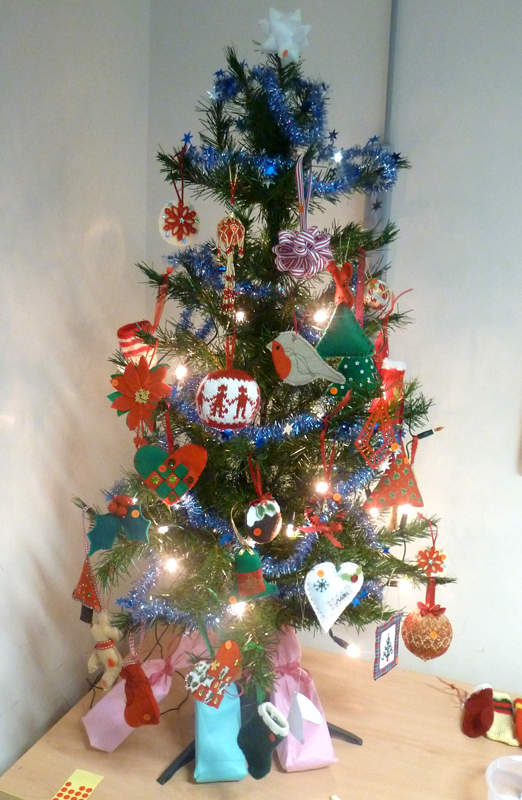 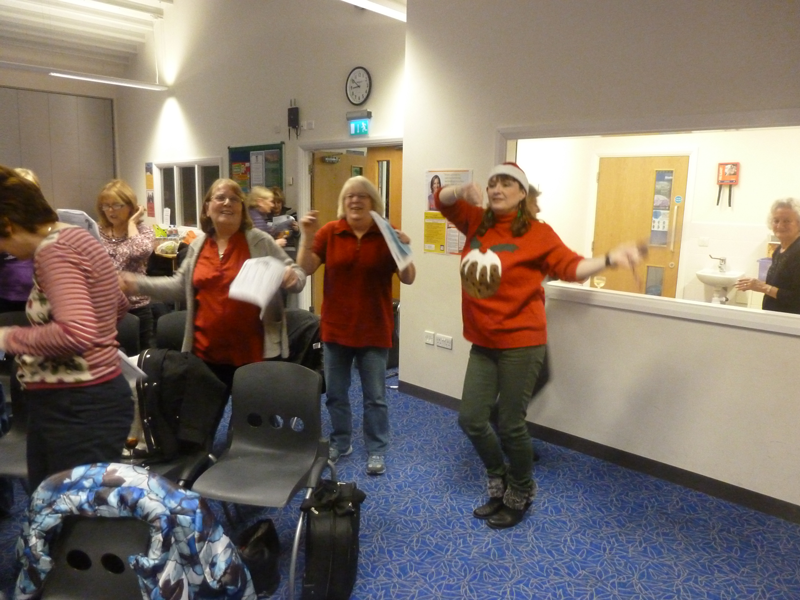 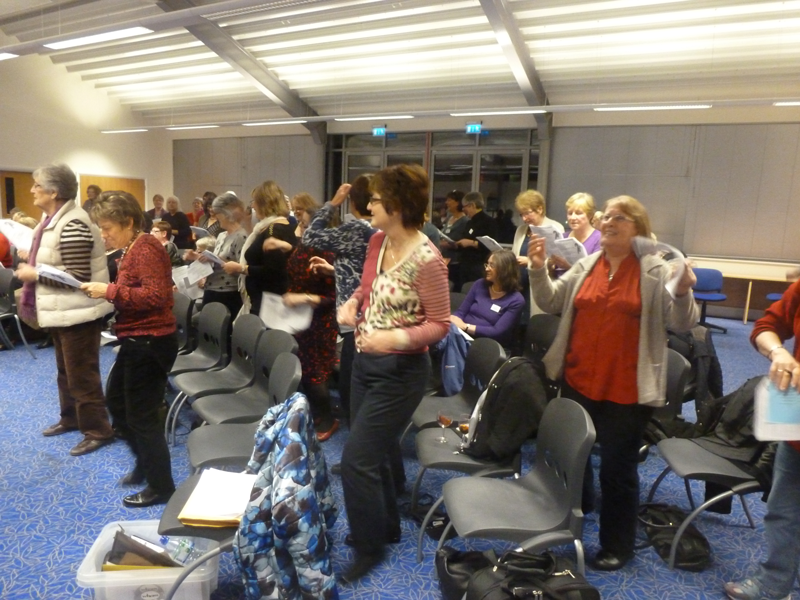 There were 64 members and 1 guest present at our December meeting where we were treated to mulled wine and mince pies, and some seasonal singing led ably by Michaela. Thank you to all concerned with organising the evening.

Agnes welcomed members to the meeting.  Following our 5th Birthday celebrations in November, she had received thank you messages from Sally & Jill (both from Surrey Federation) and from Debbie at Carers Support Merton (our 2013 Charity of the Year) http://www.csmerton.org/.  Copies of their messages were on the Notice Board.  A short article had appeared in the Residents Journal with some photographs of our activities over the last 5 years.

Ann said that our planned Denman Designer Day in April had been cancelled due to insufficient interest.  She said there were currently 2 opportunities for members wishing to attend Denman being organised by Surrey.  These are

Information and Application forms available to members from the Secretary on secretary@wimbledonwi.org.uk.

Bouquets of flowers were presented to Janice and Eileen (as retiring Committee members) in recognition of their work on behalf of our WI, and to Gillian for the numerous activities, refreshments etc she helps organise for us all.

Members present took part in voting on the selection of resolutions for consideration by next year’s NFWI Annual Meeting. Our members voted as follows:

These will be returned to Surrey Federation who will collate the results from all their WIs and provide them to NFWI so that the Board of Trustees can finalise the list of resolutions for the Annual Meeting in June, based on the number of selections from WI members throughout the country.

During the evening members were able to admire the efforts of some of our members:-

Christmas Tree Decoration Competition Thank you to all those members who helped to decorate our Christmas tree.  We had 29 beautiful handmade decorations and congratulations go to Val Fone, Margaret Brotherton and Liz Clemow whose decorations were voted as the top three by members.  Hopefully they might have inspired you to have a go at making something.

“Get Your Knit On” – squares to make blankets for vulnerable older people which will be distributed by Age UK Lambeth.  93 squares were on display on the night and more are promised – we should have well over 100 squares in the end.  A great result and thank you everyone who contributed.

Thank you all for your generosity in donating items for the Food Bank http://wimbledon.foodbank.org.uk/. These supplies are particularly welcome to help feed local people in crisis this Christmas.