Agnes, the President, welcomed the 74 members and 9 guests to our meeting when the main event was a talk and discussion with Siobhain McDonagh MP for Mitcham and Morden about women in Parliament.  We had a lively and interesting question and answer session with points discussed including the role of an MP in the constituency and in Parliament, despite being active in local politics why women were less inclined to serve as MPs, engaging the interest of more young people in voting and becoming involved in politics.  This was followed by our annual Super Raffle in aid of our Chosen Charity of the Year, Merton and Morden Guild.  We were pleased that Anne Donaghy from the Guild was able to be present for the raffle, which raised over £315.  We are very grateful for the very generous donations of prizes both from members and local businesses.

Quiz Night 22 March 7pm we had a great evening.  Thank you to everyone who helped make this a success.  We raised £320 for Merton & Morden Guild with the balance going to our own WI funds.
Plant Sale –it is our plant sale at our May meeting.  Please remember to sow seeds and take cuttings and bring them to that meeting.
Wool voucher April WI Life page 59 – anyone not intending to use this voucher please bring it to our meeting so that it can be exchanged for a free ball of wool from Hobbycraft to use to knit blanket squares.
Easter egg cosies – these lovely cosies made by our craft ladies were available to purchase with the proceeds of £70 going to support Merton & Morden Guild.

Food Bank – thank you for your continuing contributions.  There will be a concert to raise funds for the Food Bank on 9th May 2014 at St Luke’s Church, Ryfold Road, Wimbledon Park  Tickets were available for sale at the meeting.
Sign up Sheets – The following were available:
Wimbledon Village Fair Saturday 21st June – our stall is our main fund raising event to help run our WI.  More help needed on the stall and/or produce – thank you to those members who have already signed up.  Veronica, who is kindly acting as the Coordinator for our stall, gave a presentation covering amongst other things the types of suitable produce for the stall.  A separate note about this is being sent to members.
Surrey News – this meeting was the last chance to order and pay.
Chocolate making and Pottery Taster Courses – Do you fancy trying your hand at chocolate making or pottery?  We are considering providing subsidized taster courses probably on a Saturday at a local venue.  Expressions of interest required at this meeting.  Further details and date(s) will depend on numbers interested in attending.

On the NOTICE BOARD this month – lots of new information, including:

A long awaited visit to Downton ……  ooops, Highclere Castle, finally came around last week.  A full coach load (see picture) stood outside the Ursuline sixth form at 9.45 whilst Gillian with her clipboard checked us all in.  Sun shone as prearranged with WI head office and as the coach drew up, there was a mad scram for seats.  So reminded of day trips at school, the need to sit beside best friend, actually anyone would do to avoid the horror of sitting beside “Miss” in the front seat, with the First Aid Kit – inclusive of plastic bags and damp flannel therein – long before Wipes were invented of course.  In those days packed lunch was eaten before we were into third gear, but now the only comestible I spied was the surreptitious slurp of bottled water.  I sat beside BF Frieda and in the aisle beside me sat Sue who was knitting.  Through this encounter, I now have promised help on my embryonic knitting, a far too ambitious project for my talents, a  Mystery Blanket and a date at Waterloo (not mine I hope) to help me cast-on with circular needles!!!!  The WI to the rescue again. 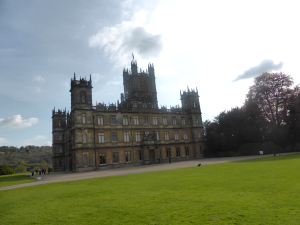 The journey was swift and smooth and apart from small excitement of fire engine overtaking us at top speed, and then further on, the sight of lorry on fire, we arrived in good time.  An efficient and gillet clad lady in tweed skirt and sensible shoes, gave us a brief rundown of rules.  As per school days, didn’t listen, so can’t tell you what they were,  but no-one had to see Gillian after the trip, so we obviously all behaved.  Highclere was so much smaller than I had imagined from TV and much more cosy than Blenheim (WI trip last year).  We wandered around, drawing room, morning room etc and in each there were guides to give you a little history.  Bedrooms upstairs looked lived in, hairdryers on dressing tables, mags on bedside tables, little notices told you this was Lady Cora’s bedroom or the bedroom where Lady Mary got up to hanky-panky with a Turkish diplomat in Series One.  There are no kitchens where filming took place as these scenes are filmed in the studio.  Currently Series Five is underway and the TV crews were expected next week.  One guide hinted to me that Series Six maybe on the cards too.  You heard it here first.

The castle stands on the site of an earlier house, which was built on the foundations of the medieval palace of the Bishops of Winchester, who owned this estate from the 8th century. The original site was recorded in the Doomsday Book.  Since 1679, the castle has been home to the Carnarvon family.  The house was rebuilt in 1839 by Sir Charles Barry but in subsequent years fell into disrepair.  The present Lord and Lady Carnarvon have only recently been able to bring the house back to life, because of increased visitors due to the success of the Downton Abbey series.  They had been living in a cottage in the grounds, but now they live in the Castle during the winter and only move back into the cottage when the house is open to the public.

During our visit, I managed to have coffee and shortbread, lunch (toasted pannini) and a cream tea and only saw the ice-cream man on way back to coach so missed out there.  There were no escapees, and the coach set off on time for home.  Shame.

Many thanks to everyone who organised this trip.  I thoroughly enjoyed the whole day and already looking forward to the next outing.

PS  Would love to go to Knole or Leeds Castles. 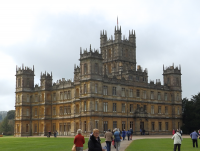 Does this actually say something? 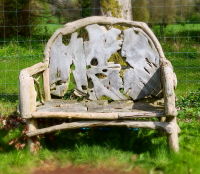 Part of the Elizabethan Castle

A stunning view of England

The castle is high on a hill

The Wood of Goodwill 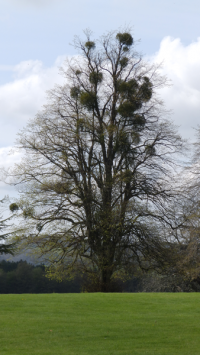 You can see why it was used for Totley Towers in Jeeves and Wooster!

A great Quiz Night for family and friends of our WI with a good chance for a natter.  The quiz devised by Nige the Quiz tested our brains which were nourished by some splendid Ploughman’s platters half way through.  Some were able to show off their very broad and detailed knowledge, which resulted in high scores.  Others, in particular me, clearly need a lot more quiz practice to get anywhere near the talent shown by many there on the night.  Agnes, as Master (or should I say Mistress) of Ceremonies, once again kept the evening moving, scoring, and collecting answer papers, with help from WI members and family.  Our thanks also to the Committee members who arranged for, and prepared the food and refreshments, and of course the all important washing up afterwards.  Needless to say it was all hands to the deck at the end of the evening as members and guests helped clear up in the best tradition of the WI.

Thank you to everyone who participated to make the evening such a success.

Agnes, the President, welcomed the 64 members and 8 guests to our meeting in the Dining Hall at Ursuline High School (our usual venue of the 6th Form Centre was being used for exams). We were delighted that 7 of the guests paid their 2014 membership subscriptions to our WI.

We had a lively dance session with Claudio from Start the Dance who showed us the steps for two Latin American dances – merengue and salsa. By the end of the evening, everyone seemed to have enjoyed themselves very much. Congratulations to all of those of you who had a go even though it looked challenging and exhausting.

Agnes reminded members that the following signup sheets were available at the meeting and to pay at this meeting for any trips/events they had booked:

Kosovan children – A thank you drawing from the Kosovan children was on the Notice Board for the monies Elizabeth Gowing had given them from the %age of the sales donated as a result of purchases made by our members at our February meeting.

Knitted Squares – Knit some more squares for blankets – see our website http://www.wimbledonwi.org.uk/category/arts-and-crafts/. We will be saving some for next year’s Get Your Knit On and some will be made into blankets for our charity Merton & Morden Guild. Some wool was available at the meeting.

Dress making Workshop 22nd February Fifteen members spent an enjoyable morning sewing, chatting and sampling homemade cake. Thank you to all who made the dresses either on the day or since and also to those who contributed material. 27 dresses have been sent off this week to the orphanage in Mombasa. More information and pictures will be on our website soon http://www.wimbledonwi.org.uk/dress-a-girl-around-the-world/. Julia will be going out to Kenya again in September so, if you would like to make a dress or two, they would be gratefully received. We may run another workshop if there is sufficient demand.

Surrey Federation WI Annual Council Meeting – Ann, the Secretary, said she’d been to Dorking to represent our WI. She gave a brief rundown of the event. Copies of the Federation Chairman’s Address, Treasurer’s Report and the Budget for 2014-14 were on the Notice Board. A fuller report of the meeting would be on our April meeting Notice Board. Lynne Stubbings National Federation Vice Chairman and Chairman of the Training Committee gave a brief history of her involvement with the WI. and a glimpse of what the NFWI are planning for our Centenary Year. Lynne’s main message was that it was up to us as current WI members to make the most of our opportunities and help lay the foundations for current and future WI members to be the Inspiring Women of the next 100 years. During the return train journey Lynne asked Ann to send her greetings to Wimbledon WI and hoped we enjoyed our meeting that evening. Some of the forthcoming events in Surrey (details on Notice Board) mentioned at the Federation Annual Meeting were:

Notice Board – Ann reminded members to look at it. Among the other new material this month were:

Our Website – Joanna has given our Website a revamp and added some new material – do look at it regularly. Congratulations to Joanna for all her hard work on our Website which has been chosen to feature at WI’s Inspiring Women Working Together conferences around the country and described as “a great example of a WI website, linked to the NFWI site”.